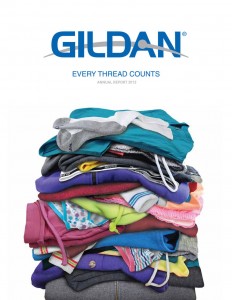 EDEN, N.C.—Gildan Activewear Inc. invests $23.1 million in the expansion of its Eden, North Carolina, distribution center. The Eden facility, which opened in 2000, services the company’s printwear business division and is the company’s “logistics hub for our North American operations and supply chain,” states Nick Freitag, vice president of distribution for Gildan’s printwear division. The company ships its printwear products to more than 30 countries around the globe, although the vast majority of shipments from its Eden site stay in North America, he says.

Gildan’s expansion plans include spending as much as $12.7 million on machinery and equipment and another $10.4 million in building improvements. Once construction is complete, the building will be close to 1.2 million square feet. The project is slated to be completed by the end of 2015.

“This is their fourth expansion in four years,” says Mike Dougherty, director of economic development for the city of Eden. He adds that the company is the region’s third-largest employer, behind the local hospital and the Miller-Coors plant.

Both the city and Rockingham County put up economic incentives to encourage Gildan’s expansion. The county is putting in $448,720 and the city of Eden is putting in $392,630, with both sums to be paid in annual installments throughout the next four years.

“The county and the city of Eden have always been supportive of our operations and expansion phases, which has included incentives for our previous expansions, depending on the scale of Gildan’s investment and the number of jobs it created,” Freitag writes in an email to Printwear. This latest expansion adds 16 new full-time jobs to the site’s existing 310 employees. But Dougherty says the incentives had as much to do with the capital expense Gildan is putting into the site as it did to the jobs being added. He calls the apparel company a “good employer” and a “great corporate citizen.”

Along with distribution, the Eden facility also houses quality assurance employees, Freitag says. Aside from Eden, Gildan has additional presence in other North Carolina cities with yarn-spinning operations and a $142 million plant under construction in nearby Mocksville that will employ nearly 300 people when it opens in 2016.

Gildan, which is headquartered in Montreal, has its manufacturing operations in Central America, the Caribbean Basin, and Bangladesh.